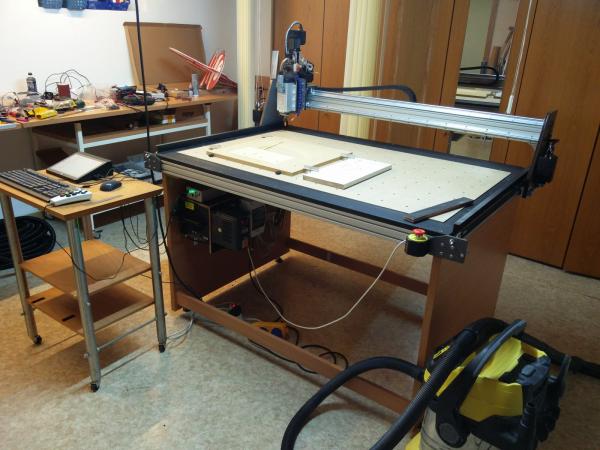 After using my enlarged eShapeoko for some years i wanted to build something larger and a bit more powerful. In between i had made some experiments with a large but very light coreXY portal usable for foam sheets and thin plywood and balsa. That was fun, but i wanted to have something more rigid and powerful. In Summer 2017 i bought some supported rails with 1500mm and 1000mm - just because they were so cheap at banggoods EU warehouse. Once they arrived i started planing a portal mill around them ;_). Due to the large size, i opted on using HTD3 timing belts with 15mm width instead of ball screws for X and Y. Timing belts worked fine on my other machines and ball screws in that length would either need to be very thick or make use of rotating nuts which would have been to expensive. For the Z Axis i bought 2 MGN 12 linear rails with 4 carriages and a 1204 ball-screw from china. After experimenting with some very cheap NEMA23 Motors, i changed my mind and bought 4 JMC NEMA23 closed loop steppers with integrated drivers. That should give enough power and ease all the cableling as is does not require an extra set of stepper drivers. Now that the machine had powerful motors, i wanted to have a powerful spindle as well. with some luck i found a good aliexpress deal for a 1.5kw air cooled spindle with inverter.

Well, getting father and buying a house took most of my time since the first parts arrived, so that it took nearly a year before i really started to assemble the machine - the good thing is that now that the machine is finished i have some space to put it ;_) Would have been quite crowded in the small basement of my former flat, now i have ~90 square meters of basement to play around.

All in all everything that i planed in librecad in 2D fitted quite well. Compared to my eShapeoko it looks really huge, massive and rigid - of course not comparing it to other machines made to mill aluminum and steel.

All listed prices are what i payed for (most incl shipping). Most of the stuff was bought over a longer time period waiting for items to go on sale or being available in the EU stock. If you have some time and do some research you will find them for a similar price i guess.

No waranties for completeness of any contructions, part lists etc.. I build from party i have just lying around in my workshop.
Please, No requests to buy frames, builds, etc.. I run this page in my spare-time and as hobby only. Want to keep my free time to work on my own projects - sorry
I will release the plans for some build at some point in time, but again, please don't ask for unreleased plans, i don't want to get rushed ;-)